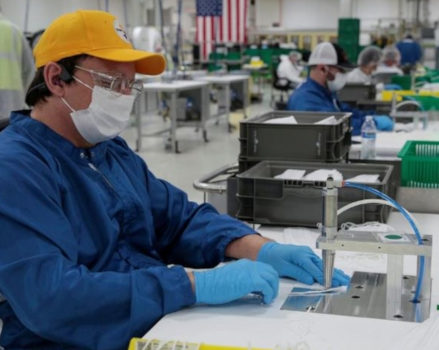 To achieve the N95 rating, a filtering facepiece must filter out “at least 95 percent of airborne particles during ‘worst case’ testing using a ‘most-penetrating’-sized particle,” GM said in a statement Tuesday.

The automaker said this required a new manufacturing process at its plant in Warren, Mich. The process mandates that N95 masks include certain components, such as a wire nosepiece and a sonic weld that extends from the nose to the chin.

After excess material is trimmed off and ear bands are welded into place, the masks are subjected to a “quality check.” The masks are then “cleaned, bagged and prepared for shipment,” the company said.

GM also said sonic welders that were used in its Brownstown Township, Mich., battery assembly plant have been repurposed for the N95 respirators. The welders previously were used to form subassemblies in Chevrolet Volt battery packs.

The automaker has produced face masks since April and has donated more than 4 million face masks and 230,000 face shields as of Tuesday. GM said it plans to donate some of the newly certified N95 respirators to front-line workers.